Pictures of booth and activities 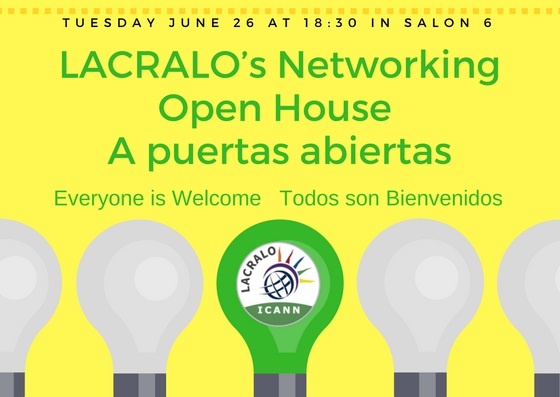 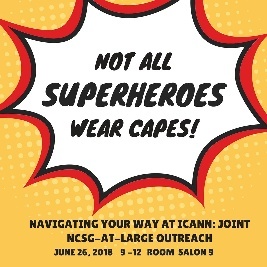 With inputs from APRALO's Ali AlMeshal and Rao Naveed Bin Rais and from ICANN's Baher Esmat, it was decided it was more feasible to have an outreach session at the ICANN venue. Further was decided to have to have a session for At-large for academia and students to attend.
In order to have a dedicated room with mics, interpretation, the Outreach and Engagement SC Session scheduled on: Monday 30 October from 15:15-16:45 will be split the session into two parts, one half for the SC work and the 2nd half for the session for academia, students, and for Fellows and Nextgen.

Furthermore, with the ICANN60 schedule posted at https://schedule.icann.org/, Ali AlMeshal and Rao Naveed Bin Rais are checking whether academia and students can attend the entire day which would require a group of us to
- help new attendees (those that didn't attend Saturday for the joint NCUC/At-Large event) register and get their badges
- help guide attendees  to which sessions they should go to (welcome ceremony, etc) and throughout the day, having the attendees and guides meet back regularly at the ICANN At-Large booth to hear questions and go off to other sessions.

Olivier Crepin-Leblond is following up with NCUC as to the possibility of a joint NCUC/At Large session which will likely be held on Saturday. This can be another opportunity for promoting with academia about At-Large.

This page and associated sub pages are to document and coordinate the upcoming At-Large Outreach activities at the Internet Governance Forum 2017 Geneva (https://igf2017.swiss/) from the 18 - 21 December 2017.

"Two travelers approved (one Outreach Sub-Committee member and one ALAC Member) for travel support to the IGF 2017 Meeting. Granting of support is contingent on: (1) MAG approval of at least one At-Large RALO workshop; and (2) submission of a detailed report from each traveler within 30-days of the meeting that addresses each itemized metric as per request. The report is to be submitted to sbr-outcomes@icann.org and is a condition of future resource allocations. Approved travel includes assumption of economy airfare + four travel days and three hotel nights + per diems appropriate to region traveled."

Several At-Large workshops (including an Outreach and Engagement SC one) were submitted to the IGF MAG for IGF 2017. Several were accepted.

The ALAC Outreach and Engagement SC via Glenn McKnight requested a booth in May 2017 a At-Large at the IGF 2017 from the IGF MAG. This was approved in August 2017. See the booths at IGF 2017 page.

It was decided by the O&E cochairs that Glenn McKnight will be the selected person to attend IGF 2017 from the O&E.

Dev Anand Teelucksingh announced on the 2017-08-29 ALAC Subcommittee on Outreach and Engagement call, he will be stepping down as chair of the O&E SC at the end of ICANN60.

Throughout the month, we've promoted the At-Large Community Onboarding approach to all of the RALO monthly calls and the RALO secretariat call.

We've created a RALO Outreach Strategic Plans for FY18 page for RALOs to begin planning their RALO outreach strategies for the upcoming Community Regional Outreach Program (CROP - formerly CROPP, but losing the Pilot status) - Outreach plans need to be approved by regional GSE in order for trip proposals to be submitted for approval by At-Large and GSE at least 7 weeks before such travel takes place. Therefore outreach plans needs to be approved by early June 2017 in order for CROP proposals to be submitted for travel in mid July 2017 and August 2017. 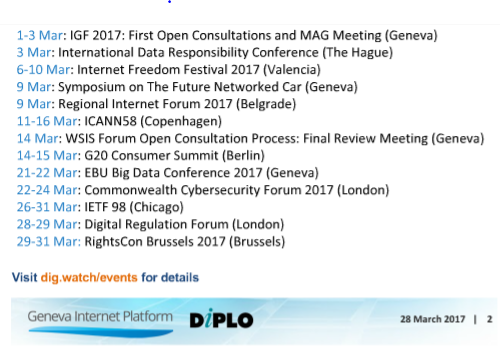 There were two outreach events at ICANN58 - a ICANN58 EURALO-NCUC Outreach Event on Saturday and a End Users in ICANN: A Topical Discussion with At-Large session on Wednesday.

Call for submission for IGF  Geneva 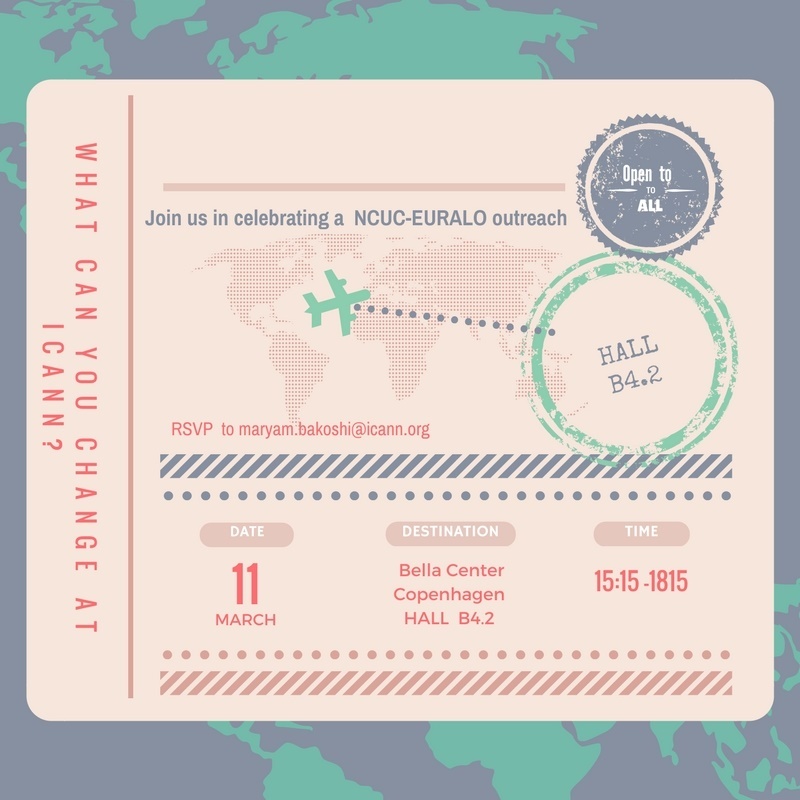 In advance to the  ARIN38 and the NARALO GA in New Orleans we have had prep outreach calls to educate the community on the  ARIN community.  During the event we will have   NARALO Outreach table during breaks and lunch during  the ARIN event

Two mandatory sessions with one in Feb and another in March. 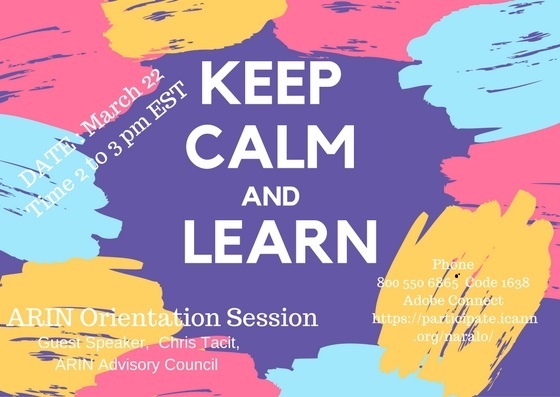 We have completed four out of the five trips and requested the last CROPP trip to be completed on schedule.

An extensive guide in magazine format was created targeted to the  Fellows, NetGen and Newcomers to informed that about ATLARGE and others

2016-12-15 ALAC Subcommittee on Outreach and Engagement discussed the IGF 2016  and the need for a more formal structured At-Large outreach approach for the IGF.

The ICANN Stakeholder Analysis Tool was updated to reflect the Fellows attending the ICANN58 meeting in March 2017.

At ICANN57, we had a session with the Nextgen attendees https://icann572016.sched.com/event/8czb/alac-subcommittee-on-outreach-and-engagement-with-next-gen which was well attended and with many excellent questions from the Nextgen students.

The ICANN Stakeholder Analysis Tool was updated and presented at the ALAC - ccNSO session at ICANN57 to research members of the ICANN community in At-Large Fellowship, GAC and ccNSO by country or by region in time for ICANN56 in a dashboard style review by country.

Members of the O&E met on Wednesday June 29 to demo the ICANN Stakeholder Analysis Tool developed by the O&E to track stakeholders (GAC, ccNSO, Fellowship) by country and region ; a prelimiary overview of the Fellowship programme and possible outreach activites for ICANN 57 at Hyderabad, India. See http://sched.co/7Mdf for recordings and transcripts.

On Monday June 27, we held a session with the NextGen attendees, introducing them to what is At-Large. See  http://sched.co/7Lrv . See also photos by Glenn Mcknight & by ICANN . The presentation can be found at Outreach Activities at ICANN56

On the 2016-04-25 ALAC Subcommittee on Outreach and Engagement call, discussion focused on what to do for outreach during the ICANN56 meeting in Finland. Noting the challenges on doing outreach soon after midsummer, the intent would to to have one session on Monday with the ICANN fellows and Nextgen participants, with social events on Tuesday afternoon/evening and possibly a civil society networking event. Pre ICANN56, various potential At-Large, civil society stakeholders would be idenitified and contacted to be invited to the meeting and/or social events.

The O&E met at the ICANN meeting in Marrakech : https://meetings.icann.org/en/marrakech55/schedule/sun-alac-outreach

On the regular ALAC Subcommittee on Outreach and Engagement 2016-02-17, Elizabeth Andrews provided an update on ICANN Learn and the O&E will be notified of changes to ICANN Learn and begin to give feedback on the courses ; there was also an update to the At-Large engagement with ICANN Fellows - see Analysis of ICANN Fellowship Programme and Chris Mondini talked about the preliminary ideas ICANN is planning on  enhancing  the  stakeholder  journey in ICANN.

The calls on January 14 and January 19 focused on the Outreach activities for the ICANN 55 meeting in Marrakech in March 2016. Various ideas were discussed with AFRALO leadership and ICANN Staff. The current planning can be found at AFRALO Outreach Event Workspace and Daniel Khauka Nanghaka, the O&E cochair will be working with AFRALO leadership and ICANN staff in having separate calls to continue to coordinate event planning for ICANN 55 Marrakech.

On the January 25 call, the FBSC proposal for "Access by RALOs for funding of local engagement activities" that was submitted by the O&E was discussed. See proposal at https://community.icann.org/download/attachments/58000826/FY17-OutreachEngagement-access-by-ralos-for-funding-of-local-engagement-activities.pdf

Next, there was some preliminary discussion on the At-Large ICANN Civil Society Engagement in Fiscal Year 2016 Workspace with a decision to have a call next week to continue the discussions.

On the 2015-12-14 ALAC Subcommittee on Outreach and Engagement call which was for 90 minutes, Glenn McKnight lead the discussions about the At-Large ICANN Civil Society Engagement in Fiscal Year 2016 Workspace continued with Jean-Jacques Sahel, Regional VP, Europe and Adam Peake, Senior Manager. Next Maureen Hilyard introduced some of the Ideas for Engagement Strategies. Some of the other ideas mentioned involved the use of ebooks, infographics, audio books or clips, to better convey At-Large issues. There will be a followup meeting with Chris Mondini on the work GSE is planning to promote stakeholder journeys. There will also be a call to learn more about ICANN Learn.

Laura Bengford, Jeff Salem and Ariel Liang gave an overview of the Get Involved Mock-Up which will be part of the new At-Large Website which the O & E was asked to give input on.

to promote how At-Large members can get involved.

A  Face to Face  meeting was held in Dublin with Dev Anand Teelucksingh as the remote Chair and Glenn McKnight as the North America Co-chair. The meeting despite being later in the evening was surprisingly well attended which included presentations by JJ Sahel on the Civil Society Engagement document and a presentation by Jeff Dunn and some of the NeXT Gen students. See 2015-10-20 ALAC Subcommittee on Outreach and Engagement - F2F Dublin for meeting recordings and https://community.icann.org/download/attachments/56141958/outreach-and-engagement-icann54-dublin-presentation.pdf for the presentation.

Update on CROPP  Submiissions by Region

On the 2015-09-08 ALAC Subcommittee on Outreach and Engagement call:

Additional comments were sought from the RALOs after this call and proposals updated accordingly. The proposals were approved on Sept 14 and sent to the relevant GSE for their review and approval.

On the 2015-09-28 ALAC Subcommittee on Outreach and Engagement call, updates on the RALO strategies were done ; a spreadsheet used by LACRALO members to survey persons and organsiations in countries without ALSes was shown ;

Held two calls in August : 2015-08-03 ALAC Subcommittee on Outreach and Engagement and 2015-08-17 ALAC Subcommittee on Outreach and Engagement. Dev Anand Teelucksingh was confirmed as the chair and regional ; Maureen Hilyard was confirmed as a regional co-chair from APRALO and the liasion to the At-Large Ad-Hoc New Meeting Strategy Working Party working on outreach matters for the new format of the ICANN meetings. The APRALO Outreach Strategy was reviewed and approved by this WG with the proviso that this strategy can be updated. NARALO also presented their draft outreach strategy for comment.

On the 2nd call, with the NARALO Outreach proposal being approved by NARALO, it was formally approved by this WG. EURALO, LACRALO have yet to submit any ideas for their outreach strategies whilst AFRALO has done some preliminary work on their outreach strategy. A group calendaring solution based on Teamup for tracking and sharing possible outreach events by At-Large and GSE. Also on the second call, members from this WG were selected to be on the At-Large Community Regional Outreach Program Review Team (CROP RT)

The ALAC Subcommittee on Outreach and Engagement page was updated with proposed work items for the rest of 2015.

A call for persons to join the ALAC Subcommittee on Outreach and Engagement was posted to the RALO lists (see NARALO's call  ) as an example.

One urgent item is for this group to assist with developing a At-Large Strategy for all RALOs for submission to regional Global Stakeholder Engagement (GSE) for approval. If approval is not done before September 10 2015, then At-Large will not receive CROPP funding.

On the 2015-05-15 ALAC Subcommittee on Outreach and Engagement call, we reviewed two draft styled brochures and made suggestions. The trifold brochure was chosen for and the At-Large Brochure Redesign 2015 page created to make suggestions in time for printing and availability at ICANN 53.

Also draft brochures have been produced by ICANN Communication Dept - a joint call with Secretariats and this WG will be organised soon.

On the 2014-12-18 ALAC Subcommittee on Outreach and Engagement call, we'll be working with the ICANN Communications Dept to update our At-Large and RALO tri-fold brochures

Also discussed the CROPP RT where concerns were raised the coordination of RALO leadership with their CROPP RT members ; an reminder to the RALO lists to be posted soon.

Also for review ; see how the external events calendar can be better maintained.

Had conference call on 2014-09-29 ALAC Subcommittee on Outreach and Engagement where we discussed the Post ATLAS II Implementation - Outreach & Engagement ; At-Large Community Regional Outreach Pilot Program for FY15 ; there was a consensus call for Murray McKercher to be  co-chair of the Outreach SC

The At-Large procedure to submit travel requests to the CROPP was agreed upon.  Members from the Outreach SC were selected to serve on the At-Large Community Regional Outreach Program Review Team (CROP RT)

Following a call to the RALO mailing lists to repopulate this WG, The Outreach SC had a call in October 10 2013 to discuss the Community Regional Outreach Pilot Program (FY14) (CROPP) and a At-Large procedure  to submit such requests for Outreach travel to the CROPP.