How can I participate in this meeting? English Conference ID = 1638

1. Roll Call and Apologies and Confirmation of Quorum– Staff (3 minutes)

2. Welcome, Aim of the Meeting, Adoption of Agenda and Call for Any Other Business or other Amendments – Maureen Hilyard (3 minutes) 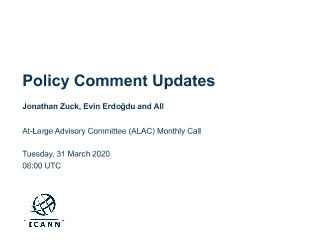 Recently Ratified by the ALAC (Since last ALAC Monthly Meeting)

Initial Report of the Expedited Policy Development Process (EPDP) on the Temporary Specification for gTLD Registration Data Team – PHASE 2
For all recommendations not listed in the ALAC statement, the ALAC noted that they they “Support as written”. The ALAC “supported wording with change” for several other recommendations - 1, 6, 7, 9, 15, 19 - and made a general comment that differentiation between natural and legal persons would offload the system from unnecessary queries that are permissible under GDPR.

Second Security, Stability, and Resiliency (SSR2) Review Team Draft Report
The ALAC noted that ensuring the security, stability and resiliency of the DNS is arguably ICANN's single most important role. The ALAC has a particular interest in the recommendations related to domain name abuse, and notes that several of the recommendations overlap with and complement those issued by the RDS WHOIS2-RT and the CCT RT. DNS Security, stability and resiliency is not something that we can afford to ignore.

The ALAC has a particular focus on and interest in DNS Abuse. To address this may require contractual changes to facilitate Contractual Compliance action. Such changes require either negotiations with the contracted parties or a PDP, and the ALAC recommends against a PDP and instead encourages ICANN to come to an agreement with contracted parties. Known vulnerabilities need to be corrected with the utmost haste.

The ALAC made several suggestions to PIR regarding the issue of ISOC/PIR. The ALAC noted that PICs are the best mechanism with which to enshrine the essential characteristics of a .ORG registry, yet there are significant issues with PIC enforcement that need to be addressed for PICs to be considered a trustworthy assurance. They noted that from the standpoint of an "individual end user," a 10 annual price cap would add a lot of predictability. The ALAC also noted that the stewardship council for .ORG is a good start, but its mandate should be wider than just free speech and privacy, and suggested a few board seats reserved for 501c(3) organizations, chosen by the community, would be more powerful. Reserving certain seats to be selected by NPOC and perhaps the ALAC (to represent the individual registrants) would help a great deal.

The ALAC’s objective is to enshrine PIR's best practices in its contract with ICANN such that they survive any further transitions of ownership.

See: Letter from Maarten Botterman regarding ALAC Advice to the Board on the ISOC/PIR issue (20 March 2020)

Draft FY21-25 Operating & Financial Plan and Draft FY21 Operating Plan & Budget,
The ALAC congratulated the ICANN Finance and Planning team, as the draft plans and budget have shown great improvement over the past few years. Not only in how the information is provided, but in the way the plans and budget are structured. The ALAC made several suggestions with regards to the Operating & Financial Plan and Budget, emphasizing that there is not an exact correlation between the number of domains and the income of ICANN. This is important because ICANN relies upon the number of contracted registries and registrars and the number of domains a gTLD has.

The ALAC drafted a separate response to Appendix C, relating to the Evolution of the Multistakeholder Model, following their statement. The At-Large community registered its surprise and disappointment at seeing this important subject, which has been such a major topic of discussion, now relegated to an appendix in this Public Comment - in which it is unlikely to get the time and attention it deserves from the ICANN community. 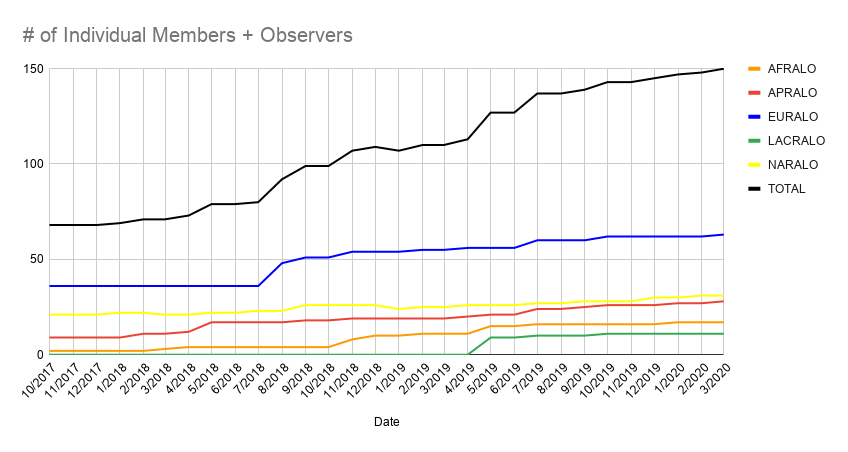 6.  Reports and Discussion with At-Large Plus Leaders – Introduced by Maureen Hilyard  (10 minutes)

b. WGs: CPWG and Sub-Committee on Outreach and Engagement

11. Feedback on ICANN67 and Priorities for ICANN68 - Maureen Hilyard (10 minutes)

a. Key takeaways for ICANN67 and feedback from SOAC Chairs

b. Key priorities for ICANN68 and Next Steps