Expand all Collapse all
1736742
~cheryl.langdon-orr
3
true
Skip to end of banner Go to start of banner

About Me in ICANN...

I recently had the honour of serving my fifth and final (2020-21) term as the ALAC Liaison to the GNSO handing over the role on October 28th 2021 to the very capable Justine Chew my final and farewell report is linked below. This means my current leadership commitments entering 2022 are:  CCWG WS2 Accountability  and ATRT3 Implementation of Recommendation(s) Shepherd Teams; Nominating Committee Review Implementation Working Group - Vice-Chair; Convenor of the ALAC Prioritization Small Team of the Operations, Budget and Finance Working Group (OFB-WG-PST) 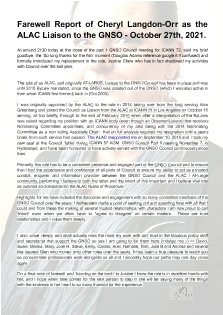 Some not so recent history...

In June 2015 I was humbled and very proud to be awarded the second ICANN Multistakeholder Ethos Award along with  Nii Quaynor. This award first established in 2014, "... was created to recognize those ICANN participants who have deeply invested in consensus-based solutions and the importance of ICANN’s multistakeholder model to Internet Governance."

Previously I had been appointed for three terms (2007-10) as the ALAC Chair, then a Vice-Chair of the ICANN At-Large Advisory Committee (ALAC) 2010-2011). I followed that role by my appointment to the ccNSO Council as the Liaison from the ALAC (2010 -2013) http://ccnso.icann.org/  until I joined the Nominating Committee Leadership Team in 2013 as the 'Chair-Elect'.

Within ICANN's At-Large Community I represent Internet Australia's (ISOC-AU) as an ICANN accredited At-Large Structure (ALS) in ICANN's Asia Pacific Regional At-Large Organisation (APRALO) and also as an APRALO representative to the ALAC, (2007 - 2011). As Chair of the ALAC, I was appointed to serve on the 1st Affirmation of Commitments Review Team for ICANN looking at Accountability and Transparency. http://icann.org/en/reviews/affirmation/review-1-en.htm;  At the end of 2018 after following the process and progress of the 2nd ATRT and other ICANN Specific and Organisational Reviews extremely closely, I was pleased to be appointed to also serve on behalf of the ALAC/At-Large in the 2019  3rd Accountability and Transparency Review Team ATRT3.  I am also an Individual member of the GNSO's Non-Commercial Stakeholder Group (NCSG). In the ICANN Community and has also served on numerous Working Groups, Work Teams, and Task Forces (mostly listed and linked below).

Convenor of the ALAC Prioritization Small Team of the Operations, Budget and Finance Working Group (OFB-WG-PST)

ALAC Budget and Finance Committee (Chair from 2007-2010; APRALO Rep 2006 to 2016 - Member 2016-2018: Participant 2019) my role in this area continues as an OFB-WG member. and current Lead of the Small Team working in the detailed Prioritization of Review Recommendations Implementation from the At-Large foci for eventual use by the ALAC in Community input and negotiations.

Cross Community WG  -  Use of Country and Territory Names as TLDs

In October 2021 I was reappointed as a Director of Internet Australia (IA) (previously known a the Internet Society of Australia, ISOC-AU) an accredited ICANN At-Large Structure (ALS) since March 2005, having served in this capacity since 2001, I am also currently serving as Vice-Chair (International) and Hon Treasurer of Internet Australia, and act as their representative on the ISOC Chapters Advisory Council.

I was a founding member of the APrIGF Multistakeholder Group (MSG) pre-2005 and continue to serve there. Current Active roles in the Event Planning and Fellowship Sub Committees, Co-Convenor of the Program Sub Committee.

I am a founder in and currently, serve on the Australian Internet Governance Local initiative (NRI) called 'NetThing' carrying on from my previous activities with the prior event known as auIGF when serving on the auDA Board.

For ten (10) years( 2004 to 27 Oct 2014) I was an elected Demand Class Director (2002-14) of the .au Domain Name Administrator (auDA) for Country Code TLD .au (which was a Founding Member of the ICANN ccNSO), serving in several Board WG's and activities most recently in the Board Finance and Budget Sub Committee, and Chairing the Board Governance and Remuneration Sub Committee. After the review and renewal of the .au Domain Administration entity a new single Class of Membership has been created and I am now an Associate Member of auDA under this new model.

I served as a consumer advocate representative to the Australian Communications Compliance (CommCom) Advisory Committee an independent code monitoring (and reporting) body, that ensures that Carriage Service Providers (CSPs)  in Australia are compliant with the Telecommunications Consumer Protections (TCP) Code, appointed late 2012 through to 2018.

More About Me:- In 1983, I left my Post-Grad research and academic career as a tutor in physiology (continuing as a Teaching Associate at the Asia Pacific Research Institute of Macquarie University during the early 2000 years) to operate our family-owned micro-enterprise, Hovtek Pty. Limited. http://www.hovtek.com.au/

I was (and still am) am a telecommuter, (so all set when COVID-19 movement restrictions came in) and licensee of domain names in .au as well as in the global DNS, but most importantly, I am an avid end-user of the Internet for work and recreation.

From 1981 to 2018 I served as a working Director in our Family owned business Hovtek Pty., Ltd. activities of Hovtek included turnkey Analytical and Quality Assurance Laboratories and associated medical and laboratory products, training, and TQM services, in 1999 we started a spin-off project called BuildersNet which was developed for the Building Construction and Demolition Industry from some of the TQM (ISO-9002, etc.,) activities; 4 years later this became a stand-alone Australian Company, (Pty. Ltd.,) and relied wholly on the Internet to facilitate its operation.

Our clients in Australia were Micro Businesses and SMEs - and internationally mainly SMEs and Government or Aid Funded bodies; We serviced and communicated with them almost exclusively online and the majority of our importation of raw materials and products and export documentation bookings etc., was handled that way. I was also a Founding Director in several Associations and a Not For Profit company interested in Global Trade and SME growth, facilitated by Internet use, under the auspices of UNCTAD.

I believe the Internet should be seen as a public asset and needs to be developed and maintained as a cost-effective and accessible resource for communication, education, community, social and business opportunities by the Australian and wider global community; my work within ICANN with its remit as the coordinator of the unique identifiers (addressing) across i.e. in the Naming, Numbering and Nomenclature within the Internet Ecosystem with its commitment to a multi-stakeholder, bottom-up consensus-driven policy development model is an essential part of this aim.

My focus and ongoing interests are not specifically technical but rather more consumer and end-user-focused. Until May 2009 when the Council was dissolved I represent ISOC-AU in the Australian Communication Alliance Consumer Advisory Council) See http://www.acif.com.au/ with a keen interest in Policy Development, Access, Outreach, and Regulatory issues.

I was an Individual Member (before the formation of our Chapter) of ISOC and am a Director of ISOC-AU See https://www.isoc-au.org.au/ since being elected in 2001 serving as Hon Treasurer from 2003, and currently serve as the Hon. Company Secretary on the executive... For more about my role and the other Directors of ISOC-AU see http://isoc-au.org.au/Organisation/Dirs.html

I am a member of auDA, the .au Domain Name administrator, and was a Board Member from 2002 to 2014, having previously worked on several auDA Policy Advisory Panels between 2000 and 2004, and as the Chair of the Domain Name Industry Code of Practice Committee.

I am also a member of several organizations and associations including Physical Disability Council of NSW https://www.pdcnsw.org.au/;  Women On Boards http://www.womenonboards.org.au/ and www.womenonboards.co.uk; Women in the Boardroom http://womenintheboardroom.com/;  the TED community http://www.ted.com/profiles and the International Sustainable Development Resource Centre, Geneva http://isd-rc.ning.com/; and as an individual and corporate representative in ACCAN http://www.accan.org.au/  additionally I have previously had active roles and engagement in Australian Government Policy Development includes active participation in Govt 2.0 http://www.gov2.com.au/; Public Sphere activities specifically in Australia http://www.katelundy.com.au/category/campaigns/publicsphere/ (Archived);

In addition to being:-