During the NARALO  November monthly meeting  held in Buenos Aires, on November 20, 2013, Garth Bruen remains the NARALO  Chair.   Darlene  Thompson  is replaced by Glenn McKnight as a result of a run-off election

Transition process needs work and discussion with staff underway for the smooth transition for  access to form letters, database of ALS and working groups

Maureen shared the information on ALAC Metrics Working Group with all RALOs and the call for comments  Maureen Hilyard is coordinating the works on this WG.  She  is looking for NARALO feedback .  Details  at  ALAC Subcommittee on At-Large Metrics

November had  No  spotlight  ALS

December had No spotlight  ALS

24 out of  30  of NARALO  ALSs have  submitted their survey for ATLAS II, which will take place in London in June 2014

The following was sent to the ALAC Chair on 13 December 2013 by the NARALO Chair:

I am requesting that the Chair take action on the attached item. To summarize a contracted party to ICANN is employing an proven invalid privacy service for its registrants. This is not my research alone but has been validated and confirmed by journalists at the Washington Post.The registrar in question has been aware of the issue for over 2 years. Because of the scale of the issue and in the interests of transparency I am requesting this be logged as an official ALAC matter with At-Large staff and be forwarded to ICANN Compliance by the ALAC Chair for investigation.

The is the text of the attached memo:

I am bringing a matter to your immediate attention which requires action on behalf of the community. Specifically, I am requesting that the enclosed issues be sent to ICANN Compliance by the ALAC Chair  that any responses be tracked for time and accuracy. An investigation is required with full transparency to the At-Large community. The facts are presented below.

The common Privacy Protection service used by BizCn is called Privacy-Protect.cn and displays the following details for Registrant, Administrator and Technical Blocks:

The domain name in the contact email address, privacy-protect.cn, cannot receive email. The following is an example of a rejection:

The example is from June 2011. As indicated, this is not a problem of the email address but the domain itself. As demonstrated this situation has existed continuously for at least 2 years and four months, being re-verified periodically as below:

The technical reason for this is that privacy-protect.cn does exist in the DNS, does not have an IP address or “A” record. The domain itself is on “ClientHold” meaning it is not placed in the registry, see below: 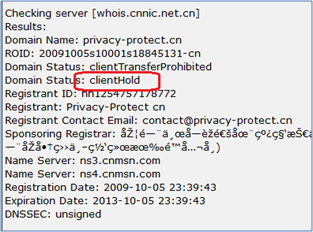 It would be impossible for the email address in any of the BizCn privacy protected domain records to receive email. The other details in the Privacy-Protect.cn records are equally as invalid, with the phone number and street address being at a minimum unreliable, at most outright false. According to the current 2009 RAA “3.3.1.8 The name, postal address, e-mail address, voice telephone number, and (where available) fax number of the administrative contact for the Registered Name.” These results have been confirmed a team of independent journalists at the Washington Post.

2. Scale and Duration of Problem at BizCn

This is not an issue of a single or even a handful of domains. According to DomainTools there are 1,272 domains using the Privacy-Protect.cn through BizCn. BizCn was first notified of the issue in June 2011. To be clear this is a situation BizCn has complete control over. According to the current 2009 RAA:  “3.7.8 ... Registrar shall, upon notification by any person of an inaccuracy in the contact information associated with a Registered Name sponsored by Registrar, take reasonable steps to investigate that claimed inaccuracy. In the event Registrar learns of inaccurate contact information associated with a Registered Name it sponsors, it shall take reasonable steps to correct that inaccuracy.” This is no longer a problem of the registrants, but BizCn.

ICANN has recently issued breach notices to other registrars for “invalid registration information associated with the Privacy Protection Service” and failing to demonstrate “the Privacy Protection Service is a legal entity operating independently from the registrar.(see: http://www.icann.org/en/news/correspondence/serad-to-villalvir-del-cid-18sep13-en.pdf)” Therefore, this is not a new or unknown problem.

I believe this situation creates safety issues  for Internet users, registrants and consumers as well as represents a threat to the stability of the domain name system. In the interests of full transparency and accountability I am requesting that ALAC take this on as a formal matter, log the complaint with At-Large staff, forward the issue to Compliance, and monitor the situation within the acceptable contractual timeframes.

The Working Group continues to use LUCID (rather than Adobe Connect) for its regular meetings.  Some newly-active members appeared and this provided an opportunity to observe any new-user difficulties with this tool.  There were some, but easily overcome.

Other conferencing tools will be evaluated:

-        an evaluation table is developed to provide some guiding criteria and to present a comparison among the tools that are tested;

-        this table is subsequently reviewed during discussions of the trials

-        trials will be scheduled as separate meetings (that is, not part of the regular monthly sessions);

-        tests were scheduled for “BlueJeans” and “ReadyTalk” for the month of August.

-        During August, the results of the “BlueJeans” trial were reviewed, preparations for “ReadyTalk” trial made – and this was evaluated late in the month.

-        Schedule for other trials in September will be prepared

-        some formatting issues about content copied from sources (for example, ALAC Announce),

-        there are a number of standardized templates (such as for ALAC posts, ALAC vote results, meeting notices, etc.) and these should be updated to simplify and enhance their presentation,

-        “acronym help” or similar measure is a strong requirement,

-        responsibilities for content preparation (the idea of a 'curation group”);

-        organization of what appears where and who manages it,

-        suggestion of coordination of social media accounts with At-Large staff;

At-Large Wiki Content will be a “place to start”, a foundation for work on the Social Media strategy.