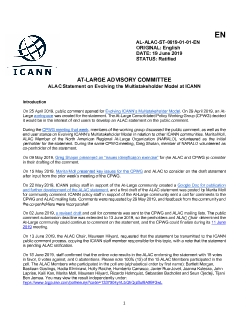 First draft to be developed by next Monday (27 May), to refine and discuss on the CPWG call that Wednesday (29 May).

This ALAC contribution to the evolving multistakeholder model condenses the 21 issues developed through the community consultations into 4 more general categories -- structural, process, participation and intergroup relations. We have taken this route as we feel this is a more productive way of addressing some of these very inter-related issues.

The structural issues are, by their nature, overarching.We note that  a multistakeholder model in which some parties are more equal than others will inevitably result in some of the issues listed such as silos, tribalism, lack of trust, timing, and others. Although it may be beyond the scope of this process, the need for a rebalance of roles and responsibilities should be acknowledged.

ALAC appreciates the opportunity to contribute further to the evolution of the multistakeholder model. The At Large community has been, and will continue to be, active participants in this exercise as we are deeply committed to the multistakeholder bottom-up policy development model but realize that the exponential growth of the Internet and complexity of managing the DNS has stretched the current resources to their limits. In this comment, we have clustered the 21 issues derived from community discussions into 4 groups: structural issues, processes, participation and intergroup relations. We feel that this is a more productive way to proceed since many adjustments that might be made to address one issue within a cluster will likely also impact other issues within the same cluster.

We realize that the current exercise is not designed as a “remake” of ICANN. However, in its deliberations to date, the community itself has put structural issues on the list. The following issues fall into the category of structural issues that will require some substantive changes to adjust to the current environment:

The need to find equality and balance among various stakeholder groups is fundamental to the multistakeholder model. Power inequalities cannot not happily coexist with a decision making process built on consensus building. What we have currently is a very unequal multi-stakeholder model where some parties have far more power than others. For an example of how our community is affected, At Large represents the 4 billion end users on the Internet but has only one seat on the board. We have also been underrepresented in the current EPDP process. Power imbalances is one of the elements contributing to siloing and tribalism (18), trust (14) as well as protracted discussions described in timing (1) -- all issues  which have been expressed during community discussions.

Addressing power inequalities that lead to feelings of underrepresentation will require adjustments to roles and responsibilities. The relationships between SOs and ACs will have to be reexamined as well as the role of the board vis-a- vis the community and ICANN org. We realize that entering into a discussion that would bring about these kinds of changes may be beyond the scope of the current process but this process could recommend that such discussions need to take place and suggest a way forward. At some point, the structure of ICANN itself and how that structure now stands in the way of a really effective and efficient multistakeholder model must be addressed.

We note that a cluster of the issues on the community developed list revolve around process -- how we do the work that we do. These include: precision in scoping (10), prioritization (4), efficient use of resources (16), work processes (19), costs (13) and timing (1). On these issues, comments from the community tell us that some of the processes take too long, consensus remains elusive, financial and personal costs are not sustainable, and volunteer burnout is rampant.

We suggest that more precision in scoping will lead to improvements in the other issues we have grouped in this category. Poor scoping causes unreasonable drifting of issues. Our members report that scoping has been too wide in the past leading to endless discussions but that there has been improvement in this area in the last few years, progress which needs to continue. One improvement would be to break up large projects into smaller pieces with very specific scoping and very specific expectations of the working group. As an example of expectation setting, the members of the EPDP were required to sign on to a set of expectations which included building toward consensus.

On the issue of work processes, some of our members have pointed out that some processes have benefited from external influences. The EPDP and the cross-community working group building an accountability framework for the transition benefited from external deadlines. The budget veto power for the empowered community had a default budget that was undesirable to all parties. Although conditions and contexts are not always amenable to the application of such measures, they could be among the tools to be considered when a PDP or other work group is constituted.

Another suggestion that could improve work processes is to ensure that key agreements and decisions along the way are well documented and easily accessible. This is not meant to inhibit the negotiating process in any way but merely to make it easy to revisit previous milestones. The complex discussions that take place over many months sometimes leave participants confused over how a process arrived at a certain point. Problems have arisen when some thought a position was agreed upon and there was some disagreement or confusion about that position and no easy way to revisit the process.

Better workflow management through staff/community led priority setting would be welcomed. There are always more tasks than people to complete them. Volunteers within At Large are engaged in many different activities including local outreach activities, pdp working groups, responding to comments, liaising with other ICANN constituencies, improving our own processes as well as preparing for various meetings. Although we are trying hard to onboard new members, there are a limited number of people comfortable taking the lead on some of these activities. During holiday periods, which differ in every part of the world, the workload continues to build.

A number of issues relate specifically to participants -- the make up of our community and concerns that the current system is not meeting the necessary benchmarks as well as the way in which engagement impacts them. These issues are: demographics (5), recruitment (6), representativeness (7), inclusiveness (8); terms (21), volunteer burnout (17). When we look closely at what is expected of engaged volunteers, it is easy to see how volunteers can quickly burnout.

With respect to the issues of representativeness and demographics, we note that the heavy demands of work inside the ICANN multistakeholder system, places certain restraints on the kinds of people who can take on that work. As a result, many volunteers come from a small pool of people who are either retired and no longer having to meet the demands of day to day work or who are working inside DNS related industries. In addition, regions and stakeholder groups where these categories of people are not available sometimes feel inadequately represented. It is very difficult to be deeply involved and hold down a job and keep up family and social responsibilities. Time demands are heavy and it often feels like full-time volunteering.

Another important element that is rarely recognized is that volunteers, whether retired, employed or self-employed usually require considerable support from their personal networks – families, employers, etc. Conference calls after midnight are not unusual and meeting ICANN deadlines for comments, etc. can cut deeply into personal and family time. The nature of the work disadvantages younger people. And it is extremely challenging for volunteers from regions with poor telecommunications services.

It is clear that inclusiveness, representativeness, demographics and recruitment are all tied to this issue of volunteer time demands and they will play out differently in different parts of the world. For example, in parts of the world where household and childcare demands fall more heavily on women, chances that women will be able to take on active volunteer roles at ICANN can be diminished. To have more women involved within ICANN, they may need support at different levels such as mentoring or twinning.

Bringing this back to the concerns expressed under structural issues, volunteers who give up major chunks of time to do ICANN work will want to feel that their work is equally valued by being equally represented in the decision making processes. They also need to feel that they are being adequately supported with financial and human resources.

The issues we have grouped as relating to intergroup relations are: cultural issues (13); trust (14); silos/tribalism (18); consensus (9)

The ALAC offers the following suggestions towards a more positive culture:

**On the issue of consensus, we point out that, since working groups are open, when important decisions are being made, we don’t distinguish between members and observers. As a result, when decisions are made, it is possible for groups who stand to benefit from certain decisions, to boost the numbers to ensure that consensus goes in their direction. Consensus should be consensus among constituencies, not consensus among the people attending the decision.

Throughout these four categories, the need for accountable (11) and transparent (12) processes is overarching in that it touches all aspects of a multistakeholder model.

We believe that the need to fully address the challenges facing the multistakeholder system is urgent and critical. We hope the ideas and suggestions contained herein will help improve the system.