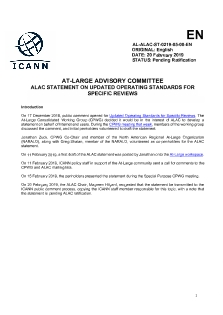 The At-Large Advisory Committee (ALAC) appreciate the opportunity to participate in the public comment on Updated Operating Standards for Specific Reviews. The ALAC understands that the specific reviews are a critical part of the accountability framework put in place as part of the IANA transition and that with some experience now behind us, it’s important to carefully define the process and the roles of the various players including the ICANN community, ICANN ORG and the ICANN Board. The ALAC appreciates the work that has gone into these updates and considers them essential for the health of these accountability mechanisms and ICANN itself. While there are some concerns about the potential for too much process associated with these already challenging reviews, it is the view of the ALAC that this level of specificity is necessary to prevent misunderstandings and missteps by any of the parties involved in the review. Scope should be well defined within the confines of bylaws and review teams should be free to pursue their mandate within that scope. Accordingly, the ALAC would like to voice our strong support for these updates to the Operating Standards for Specific Reviews.