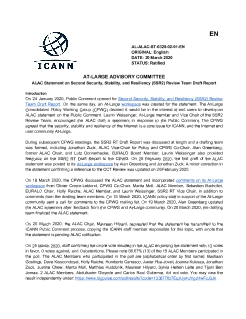 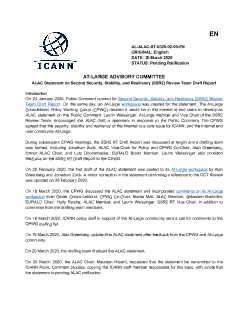 The ALAC appreciates the opportunity to comment on the Second Security, Stability, and Resiliency (SSR2) Review Team Draft Report.

Ensuring the security, stability and resiliency of the DNS is arguably ICANN's single most important role.

The ALAC also notes that in the opinion of the SSR2 RT, many of the recommendations are deemed to be of high priority. Given the current interest in ICANN of prioritizing activities with the implicit effect of not addressing those lower on the list, this could lead to not addressing issues critical to the SSR of the DNS. DNS Security, stability and resiliency is not something that we can afford to ignore. The lead item in ICANN's Strategic Plan is "Strengthen the security of the Domain Name System and the DNS Root Server System.". This must be taken into account when allocating resources and we trust that this will be taken into account when the Board works with the RT Implementation Shepherds on deciding how to prioritize the recommendation implementation.

The ALAC has a particular focus on and interest in DNS Abuse. To address this may require contractual changes to facilitate Contractual Compliance action. Such changes require either negotiations with the contracted parties or a PDP. A PDP will take considerable time and the ALAC does not advocate such a path, but rather it is time for ICANN Org and specifically Contractual Compliance to meet with those contracted parties who have shown an interest in DNS Abuse mitigation, and come to an agreement on needed contractual changes, factoring in not only penalties but any incentives that can be reasonably provided to encourage compliance.

We are living in a world where many parties seem to have a interest in destabilizing critical infrastructure and the Internet in particular. The fact that our systems have been sufficiently robust in the past is not an indication that this is sustainable moving forward. ICANN needs to take seriously the need to professionally and rigorously ensure the SSR of its DNS operations. In particular, known vulnerabilities need to be corrected with the utmost haste.