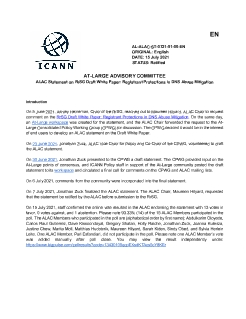 The At-Large community welcomes both the initiative by the Registrar Stakeholder Group (RrSG), to address Registrant Protections in DNS Abuse Mitigation, as well as the opportunity to comment. The occasionally conflicting interests of registrant and non-registrant individual end users demands we find the right balance in the fight against DNS Abuse.

Overall, the paper represents an excellent collection of redress mechanisms that ought to be available to registrants, in the case of mistaken take-down. The At-Large would like to proffer just a few points.

We of the At-Large community appreciate the opportunity to comment and welcome any ongoing dialog on the issue of DNS Abuse mitigation. We hope these comments are helpful.