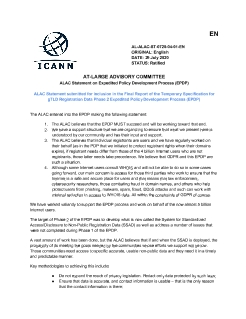 The ALAC entered into the EPDP making the following statement:

We have worked valiantly to support the EPDP process and work on behalf of the now almost 5 billion Internet users.

The target of Phase 2 of the EPDP was to develop what is now called the System for Standardized Access/Disclosure to Non-Public Registration Data (SSAD) as well as address a number of issues that were not completed during Phase 1 of the EPDP.

A vast amount of work has been done, but the ALAC believes that if and when the SSAD is deployed, the probability of its meeting the goals needed by the communities whose efforts we support will be low. Those communities need access to specific accurate, usable non-public data and they need it in a timely and predictable manner.

Key methodologies to achieving this include:

The Final Report unfortunately does none of this with any certainty.

The ALAC, along with several other groups, accepted the current SSAD model despite strong reservations because we were assured that the evolution mechanism would allow change in a practical and timely manner. Such changes were not guaranteed due to legal and liability issues, but they were possible. Based on what is now known about the evolution mechanism, and the lack of clarity about how it will work and how its recommendation will be treated by the GNSO Council, the ALAC would certainly never have agreed to the current SSAD model.

Moreover, although a Standing Committee Recommendation by default requires a standard majority vote of the GNSO Council, it is possible that this could be changed to require a super-majority[1].

All of these issues COULD be suitably addressed by the GNSO Council as it deliberates over this Final Report.

Accordingly, the ALAC is CONDITIONALLY supporting this report subject to the GNSO Council actions specified below.

If these outcomes cannot be met, the ALAC believes that this report would result in a multi-year-implementation resulting in a system which would effectively be a glorified, overly complex and very expensive ticketing system. As such, the Final Report, in its totality but excluding Recommendations #19-22, would not have our support[2].

GNSO Council outcomes required for the ALAC to support the EPDP Final Report:

[1] A supermajority vote allows a single Stakeholder Group plus one other member of the House to veto any GNSO action.

[2] For avoidance of doubt, should the conditions not be met, the ALAC will still support Recommendations 19-22 but not the rest of the report.