Following Community requests, this Confluence space has been created to house useful background materials and discussions on the topic of understanding the term “public interest” within ICANN’s remit.

Discussions on the topic of the “public interest within ICANN’s remit” and potential definitions of this term have been ongoing for years. In 2013-2014, the Strategy Panel on Public Responsibility Framework, led by Nii Quaynor, explored this topic. Based on community input at sessions and webinars, the Panel defined the global public interest in relation to the Internet as follows:

Some have recommended the report produced by the Strategy Panel on Public Responsibility. However, at individual and ICANN meetings, and at ICANN 52 in particular, it became evident there is a need and a desire to revisit this topic.

Given that there is currently little bandwidth for additional projects, and given the intense focus on other ongoing dialogues, this space has been established as a resource for all to populate with background documents that will be useful for guiding this conversation forward.

In order to facilitate Community discussion on this topic, at a time when the Community is ready to do so, staff have facilitated some desk research on how the term “public interest” is understood and applied from an operational standpoint in ICANN’s internal processes and documentation.

This will require global, multistakeholder, bottom-up discussion and ICANN wants to ensure, when the time is right, that there are enough resources and background research available. We all will need to understand the operational, legal, and fiscal parameters and limitations to any potential definition(s); providing additional resources to help inform this conversation is greatly encouraged.

If you would like to join the discussion taking place on this topic, the following mailing list has been created as a forum for initial conversations: https://mm.icann.org/mailman/listinfo/publicinterest

N.B. Addition of other relevant resources is strongly encouraged.

Background Reading on Strategy Panel on the Public Responsibility Framework

Recent Dialogues and Sessions on this Topic 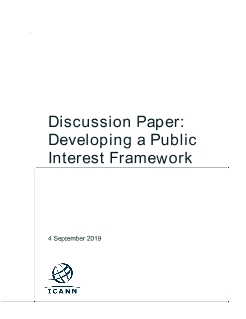 Drake begins by explaining that the standard by which various interested groups are saying Internet should be governed by is unclear, “particularly with respect to the underlying critical Internet resources, name, numbers, security issues, interoperable, and so on.” As the roundtable discussion begins, Jeanette Hofmann offers an academic overview of current research surrounding public interest issues. Hoffman argues that the term “public interest” refers to regulation. According to her research, in order for public interest not to privilege specific interests at the expense of others, due process and active social demand are the two conditions that must be met.

Olga Cavalli emphasizes the connection between public interest issues promoting open and equal social access to essential elements for a community including, but not limited to social justice, education, connectivity, Internet access, healthcare, historic preservation, religion and water. Thomas Schneider mentions that in German the word gimindvol or ‘commonwealth’ is intricately related to the concept of common, or public, interest and is a fluid term because what is common interest in one moment in time rarely endures, thus defying definition. Anriette Esterhuysen raises the issues that entitlement to defend public interest is contested amongst States and nongovernmental actors. Marilia Maciel notes that the NETmundial multistakeholder statement represents a useful convergence of existing ideas pertaining to public interest and has the legitimacy of being generated in a bottom-up, multistakeholder, transparent manner. Drake refocuses the discussion on which elements of the different concepts of public interest are relevant in the realm of critical Internet resources. Lawrence Strickling draws attention to the fact that with reference to regulation, scarcity and lack of competition are not current challenges, but that does not signify that openness should be overlooked. Wolfgang Kleinwachter quotes US Supreme Court Justice Louis Brandeis grappling with a similar issue in 1905, insisting that lawyers have an “obligation to use power for the protection of people.” Esterhusen raises the dilemma of whether permission-less innovation and public interest protection are mutually exclusive to which Hofmann responds that supply-and-demand defies permission-less innovation – those who make the demand have to have an interest in order to require the supply. Drake explains that consumer protection is also inherent in this concept.

The discussion segues into addressing the challenges of arriving at a finite definition. Rinalia Abdul Rahim acknowledges the risks of failure, inclusion and implementation. George Sadowsky argues that defining public interest as an aspirational goal is in keeping with working towards something we do not anticipate attaining; the work in a multistakeholder environment is the relevant part. Thomas Schneider concurs, asserting that an iterative process wherein the circumstances evolve requires an infinite rather than finite definition. Drake offers that defining the terms cannot be an aggregative process. Strickland adds that what the public interest is and how an organization operates within that definition of the public interest are two separate issues. Drake concludes that it is more dangerous not to attempt the definition than to attempt and fail and welcomes continued discussion.

Extracts from Wolf Ludwig’s working paper discussed below can be accessed online here.

Oliver Crépin-Leblond sets up the discussion by drawing attention to the need for a consensus regarding the term “public interest” as it is prevalent in official ICANN documents. Wolf Ludwig presents a paper on the term “public interest” from a political and historical context rather than a legal one. Tracing references to “public interest” from Aristotle through the Spanish Constitution of 1976, Ludwig concludes that the term can be used as a guiding principle. Bill Drake follows with references to “public interest” from ICANN, the NETmundial Initiative (NMI), the International Telecommunications Union (ITU) and the World Summit on the Information Society (WSIS). The term, according to Drake has been contentious since the Radio Communications Act in 1927, without a singular definition. Issues of price management, market concentration, consumer protection, balancing individual and aggregate interests, scarcity of resources and content are all debatable concepts related to regulation of the “public interest.” Lauren Allison addresses the attempts to define the concept in ICANN’s 2013-2014 strategy panel on the public responsibility framework which was tasked at analyzing both how ICANN approaches the term “public interest” and also how ICANN approaches public responsibility work. This panel proposed a definition that has not yet been formally adopted. The discussion that follows raises issues of regional perspective, accessibility, legal ramifications, human rights and privacy.

The workshop on the Global Public Interest of the Internet, moderated by Pierre Dandjinou, Vice President of Stakeholder Engagement at ICANN, was very well attended. Panelists included Nii Quaynor from the University of Cape Coast, Ghana and Chair of the ICANN Strategy Panel on the Public Responsibility Framework, Nevine Tewfik from the Egyptian Ministry of Communication and Information Technology, Rinalia Abdul Rahim the Managing Director of Compass Rose Sdn Bhd and ICANN Board Member, and Titi Akinsanmi, Public Policy and Governments Relations Manager at Google.

Panelists shared their experiences in regards to the global public interest of the Internet. Nii Quaynor discussed the ICANN Strategy Panel on the Public Responsibility Framework, which lay the foundation for the Development and Public Responsibility Department (DPRD) at ICANN. The DPRD’s strategic framework is currently oriented towards outreach and capacity building, to address gaps in participation in policymaking, as well as to inform and encourage the next generation to participate in the Internet governance process. Nevine Tewfik also shared her experience in Egypt working to create the Information, Communication, and Technology (ICT) Trust Fund, a mechanism and platform that allows suggestions for projects to be proposed, and to facilitate collaboration between government and different organizations.

Titi Akinsanmi discussed and highlighted three key issues to keep in mind when looking at the public interest of the Internet: transparency, simplicity for participants, and avoiding replication of existing projects. Rinalia Abdul Rahim also drew from her experiences, stating that firstly, the “public interest” is a challenge to define, as it should take into account the consultation of all affected stakeholders. She also spoke about how organizations in the Internet governance ecosystem can forge better partnerships to address the global public interest agenda by sharing goals, recognizing roles and mandates of partners, effective communication and knowledge sharing, and shared measures of success between partners.

Work in Progress: please email dprd@icann.org to submit other resources that may be of use in generating discussion.

Work in Progress: please email dprd@icann.org to submit other resources that may be of use in generating discussion.