9.1. ICANN Bylaws Article XI should be amended to include the following language to mandate Board Response to Advisory Committee Formal Advice: The ICANN Board will respond in a timely manner to formal advice from all Advisory Committees, explaining what action it took and the rationale for doing so.

The ICANN Board should convene a Special Community Group, which should also include governance and dispute resolution expertise, to discuss options for improving Board accountability with regard to restructuring of the Independent Review Process (IRP) and the Reconsideration Process. The Special Community Group will use the 2012 Report of the Accountability Structures Expert Panel (ASEP) as one basis for its discussions. All recommendations of this Special Community Group would be subject to full community participation, consultation and review, and must take into account any limitations that may be imposed by ICANN’s structure, including the degree to which the ICANN Board cannot legally cede its decision-making to, or otherwise be bound by, a third party.

The Board should review the Ombudsman role as defined in the bylaws to determine whether it is still appropriate as defined, or whether it needs to be expanded or otherwise revised to help deal with the issues such as:

a. A role in the continued process of review and reporting on Board and staff transparency.

b. A role in helping employees deal with issues related to the public policy functions of ICANN, including policy, implementation and administration related to policy and operational matters.

c. A role in fair treatment of ICANN Anonymous Hotline users and other whistleblowers, and the protection of employees who decide there is a need to raise an issue that might be problematic for their continued employment.

9.4. Develop Transparency Metrics and ReportingThe Board should ensure that as part of its yearly report, ICANN include, among other things, but not be limited to:

a. A report on the broad range of Transparency issues with supporting metrics to facilitate accountability.

b. A discussion of the degree to which ICANN, both staff and community, are adhering to a default standard of transparency in all policy, implementation and 59 administrative actions; as well as the degree to which all narratives, redaction, or other practices used to not disclose information to the ICANN community are documented in a transparent manner.

c. Statistical reporting to include at least the following elements:

i. requests of the Documentary Information Disclosure Policy (DIDP) process and the disposition of requests.

ii. percentage of redacted-to-unredacted Board briefing materials released to the general public.

iii. number and nature of issues that the Board determined should be treated confidentially.

iv. other ICANN usage of redaction and other methods to not disclose information to the community and statistics on reasons given for usage of such methods.

d. A section on employee “Anonymous Hotline” and/or other whistleblowing activity, to include metrics on:

iii. Reports that resulted in change to ICANN practices.

e. An analysis of the continued relevance and usefulness of existing transparency metrics, including

i. Considerations on whether activities are being geared toward the metrics (i.e. “teaching to the test”) without contributing toward the goal of genuine transparency.

9.5. The Board should arrange an audit to determine the viability of the ICANN  Anonymous Hotline as a whistleblowing mechanism and implement any necessary improvements.

The professional external audit should be based on the Section 7.1 and Appendix 5 - Whistleblower Policy of the One World Trust Independent Review of 2007 recommendations (http://www.icann.org/en/about/transparency/owt-report-final-2007-en.pdf) to establish a viable whistleblower program, including protections for employees who use such a program, and any recent developments in areas of support and protection for the whistleblower. The professional audit should be done on a recurring basis, with the period (annual or bi-annual, for example) determined upon recommendation by the professional audit.

The processes for ICANN employee transparency and whistleblowing should be made public. 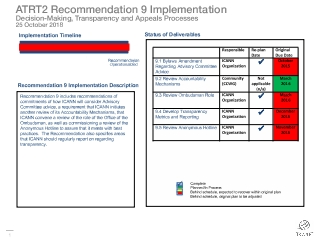