FINAL VERSION TO BE SUBMITTED IF RATIFIED 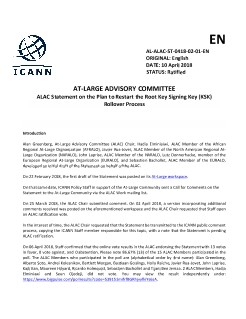 The ALAC and At-Large Community understand the need to roll the KSK but parts of the community have strong concerns for the potential impact on users world-wide.

We believe that a holistic review is needed including a risk assessment of the alternatives, in time for further discussion at ICANN62. The assessment should include then current information related to the RFC 8145 trust anchor reports, the prognosis for availability of the in-development IETF “sentinel” mechanism and the potential for using the sentinel mechanism to create a greater level of comfort prior to the KSK rollover.

In parallel, ICANN should ramp up its awareness campaign using all possible conduits to reach ISP, telcos, and governments as well as critical sectors who must be able to continue to function post-rollover and who may be in a position to communicate with key DNS providers in their regions. Banking is one such sector that must not be put offline and which may have valuable contacts in their local areas. RIRs may have good contact information for large ISPs and other large users in their regions.

ICANN should also make available an information packet, in at least the languages ICANN normally supports, and preferably more, which will allow users and businesses to understand the issue (i.e. in simple terms) and tell them what they need to do/ask with regard to their local ISPs.

ICANN should provide a simple test web address and/or application that will allow users to verify if the resolver they typically use is DNSSEC-aware. If it is not, then they are likely to be unaffected by the KSK rollover. If their resolver is DNSSEC-aware, then they should be told what to do to try to verify that their provider is aware of and prepared for the rollover (recognizing that the technical support most end-users can contact will not likely be aware of terms such as DNSSEC, KSK or Rollover). http://dnssec.donnerhacke.de is an example on which such a tool may be modelled.

ICANN should provide a list (either viewable or searchable) of DNS resolvers known to be DNSSEC enabled for which we definitively know either do or do not have the new trust-anchor installed, and the awareness campaign should describe how end users can check this list. An automated app that users could run on various platforms would be even better.

Lastly, the At-Large Community has concerns that the rollover is scheduled to take place on a Thursday (and most likely Friday in some parts of the world). That seems like a plan designed to maximize and prolong any problems. We would like to understand the potential and possibility of a minimal delay to ensure that the day-of-the-week issue reduces impact instead of increases it.

The first draft submitted will be placed here before the call for comments begins.

The postponement of the KSK roll over on 11 October 2017 was based on newly discovered information concerning validating recursive resolvers that might not be ready for the rollover, to this end ICANN org researched the new data to determine if it could be useful in determining when to roll the root KSK,  however on 18 December 2017, ICANN org reported to the community the results of its research, in that report, ICANN detailed that the collected data does not provide any clear explanation as to why so many resolvers appeared to still be using only the 2010 KSK. Most of the messages received at the root zone that indicated that particular resolvers were not ready for the rollover were not helpful, ICANN org could often not determine which resolvers sent the message or why those resolvers had not updated their trust anchors. Additionally, even when the resolvers were identified efforts to contact the operator were often unsuccessful.

Taking into consideration that

The ALAC recognizes that while it is important to guarantee that the users affected are as minimum as possible it is equally important for the security of the DNS to proceed with the KSK Rollover. To this end the ALAC supports the proposed plan for the KSK rollover while highlighting the importance of an extensive outreach plan and requesting a detailed PR plan that includes all the necessary information and documents, and post-rollover recovery guides for unprepared DNS resolvers, This is in addition to the recommendations previously mentioned in the

The ALAC is pleased to have the opportunity to comment on the “Plan to Restart the Root KSK Rollover Process”.

DNSSEC changes the nature of the most decentralized service of the Internet, the DNS, fundamentally. It transforms a lightweight "lookup table" into a trustworthy database. It's trust is made up of two important fragments: solid cryptography implementations and transparent operations.

DNSSEC anchors the zone trust by hopping the delegation hierarchy backwards. But this process does terminate at the root. Implementing the trust for the root itself is incredible hard, ultimately it's not a technical problem at all. At this point, the trust (KSK) information needs to be put in the hands of countless network operators all over the world. This task is attributed to ICANN. AtLarge has to do it's own outreach on this subject using it's own distributed structure.

Cryptographic elements always have a lifetime, if they are keys or algorithms. It is good operational practice to change the keys regularly in order update the material and to ensure, that all processes are still in place. Changes of algorithms require a working key change process. Therefore the important root keys (where all the trust is rooted) need to be changed, too.

During the preparations of the rollover, various issues arose especially from embedded and operator-less devices. Efforts were made to estimate the impact of an KSK change for affected user groups. But all the data is still vague.

The proposed plan is to schedule the rollover for October  this year, missing two possible earlier dates. The gained time should be used for intensify the communication with the network operator crowd out there. Waiting for new protocols to be deployed in order to guess more accurately is not an option. So the communication should concentrate on preparation check lists and post-rollover recovery guides for validating recursors.

ALAC supports this plan: Shifting the schedule by exactly one year makes is much more easy for outsiders to keep in time with the activities. April is clearly to short for the necessary communication. Starting in July will collide with holiday breaks in several countries. Because we depend on the operators, the October date is more appropriate in terms of workload and memorizing the important dates.

ICANN should provide a test page for the end users, which tell them in a very simple way, if they are affected by the KSK rollover or not (example http://dnssec.donnerhacke.de/). This page should offer a link to the gathered information from RFC 8145: The end user can enter the IP of the resolver (preferably automatically detected using a Nonce-FQDN) to check, if the active resolver is already trusting all active keys. This tool should be stay in place for further rollovers.

There are some recommendations:

The rise of IoT starts to create swamps of non updateable network devices. If the KSK rollover is further delayed, more and more such devices will be deployed, all of them unable to deal with an upcoming KSK change. The only chance to get those developers and companies on board is to rollover the KSK. Regularly.

The ALAC advises the Board