EURALO’s October 2017  Secretariat report is focused majorly on the events that took place at ICANN60 meeting in Abu Dhabi, United Arab Emirates (UAE) between 28 October and 3rd November 2017.  One of such is the European At-Large Organization Organization (EURALO) - Réseaux IP Européens (RIPE) Memorandum of Understanding signing ceremony. Also, discussion about the preparation for the upcoming regional's internet related policy discussions; the United Nations' Internet Governance Forum (IGF) which will take place in Geneva, Switzerland between 18 - 22 December 2017.

Wednesday 1st November 2017 was a historical day as EURALO signed a cooperation agreement (MoU) with Réseaux IP Européens (RIPE), the Regional Internet Registry...
This will allow for more cooperation between the RIPE community focusing on allocation of IP addresses, and the region's At-Large Community. At this stage we are opening the door to making European users more aware of the work that RIPE does, whilst opening a channel for end user feedback to RIPE.

I thanked the people and At-Large Structures that were physically present at the 29 March 2007 signing of the EURALO MoU with ICANN. That was the very beginning of our region's coordination.

But one person in particular deserves our strongest appreciation and thanks, and that's Wolf Ludwig. He held EURALO together for so many years. He did all of the groundwork, with colleagues in the region, to make sure EURALO was a Founding Partner of EuroDIG, in effect, the European IGF. He constantly made EURALO significant on so many levels, both inside ICANN and in outside Internet Governance circles. Wolf is a key architect of this organisation.
On a personal note Wolf is also one of my mentors at ICANN. When I initially got involved at ICANN, Wolf suggested that I'd be EURALO's IPv6 "expert" - and that step was the first step into all of the different positions that I held in this organisation and his welcoming attitude allowed me to have all the wonderful experiences that I have lived so far in this amazing organisation. 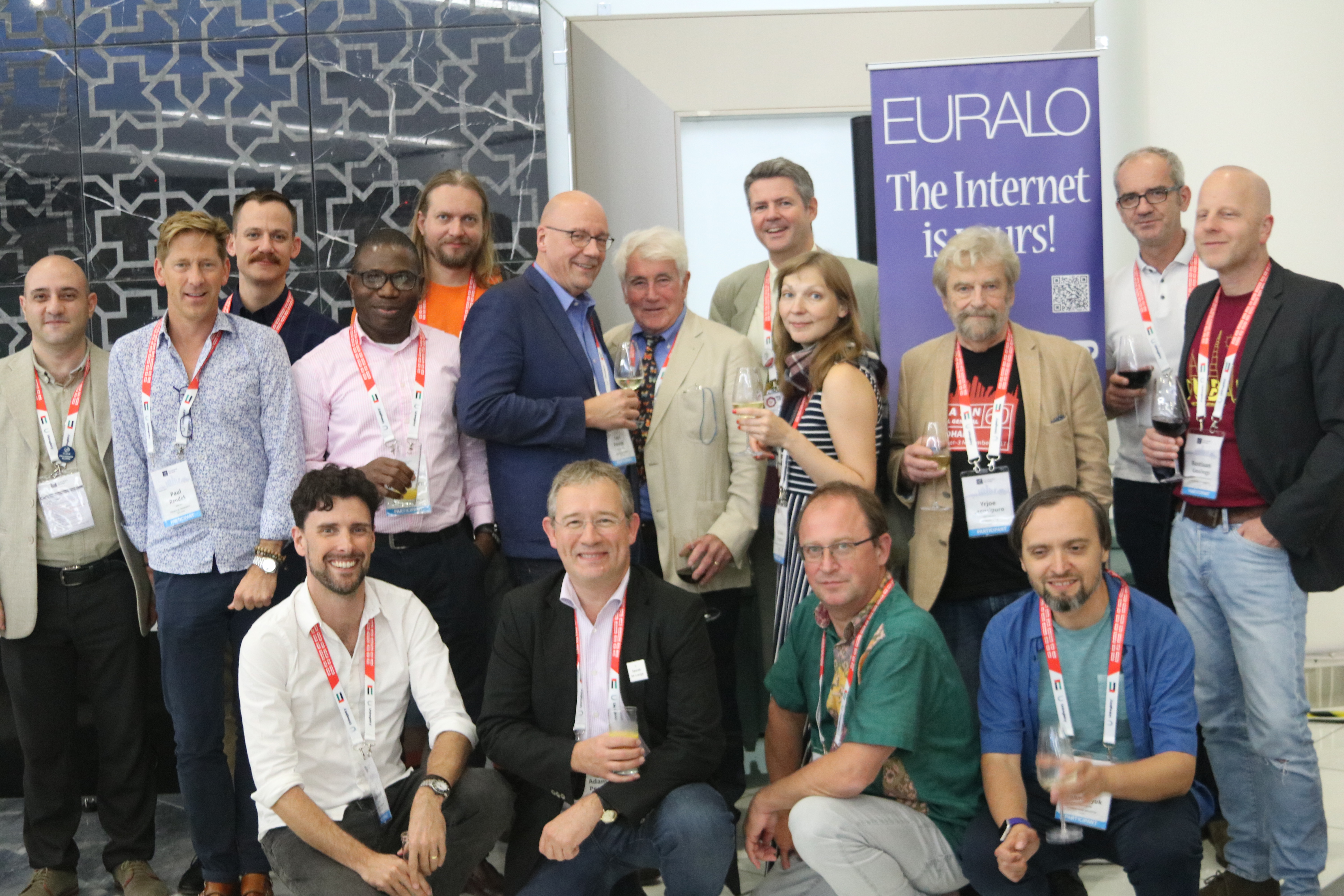 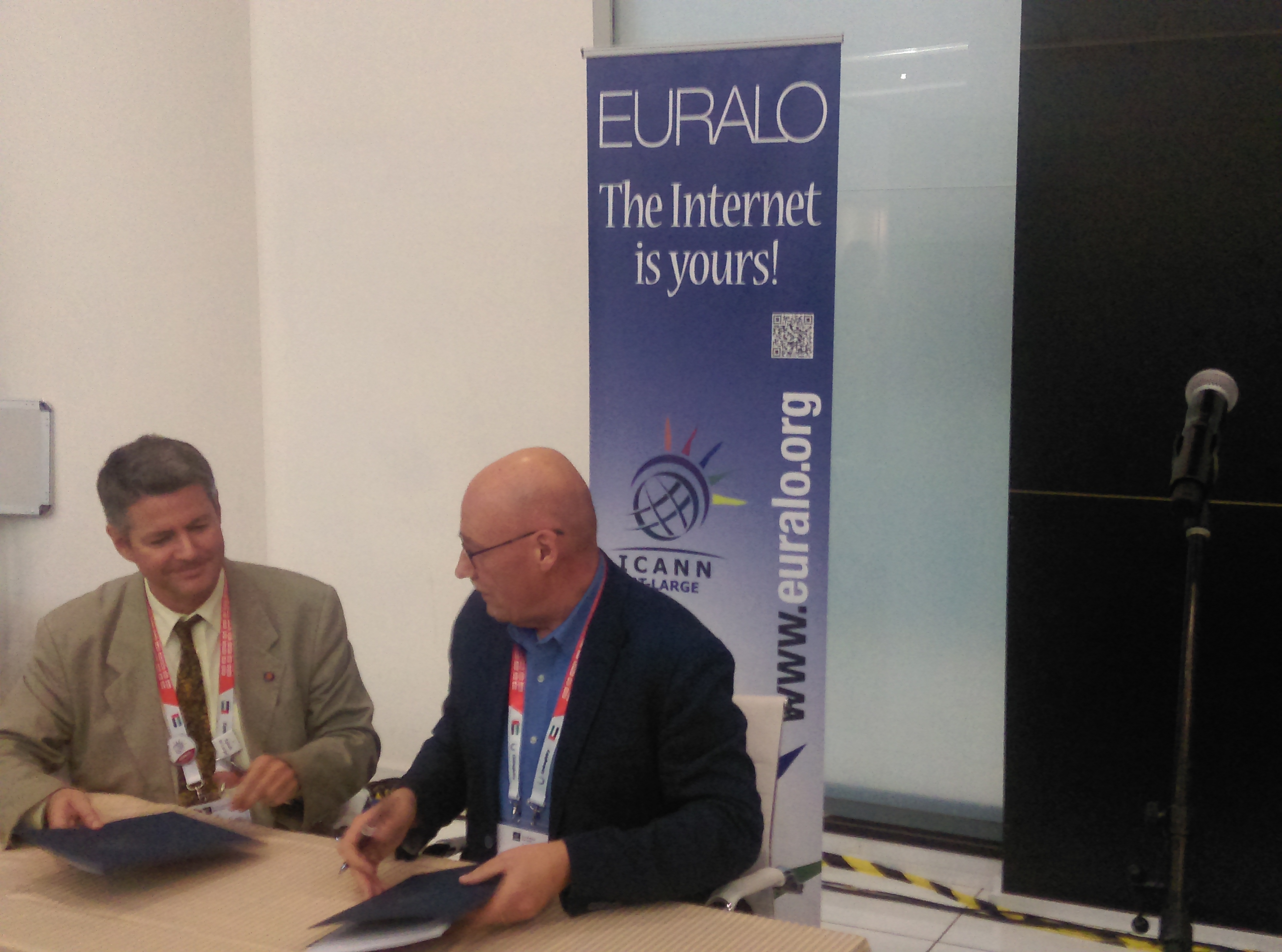 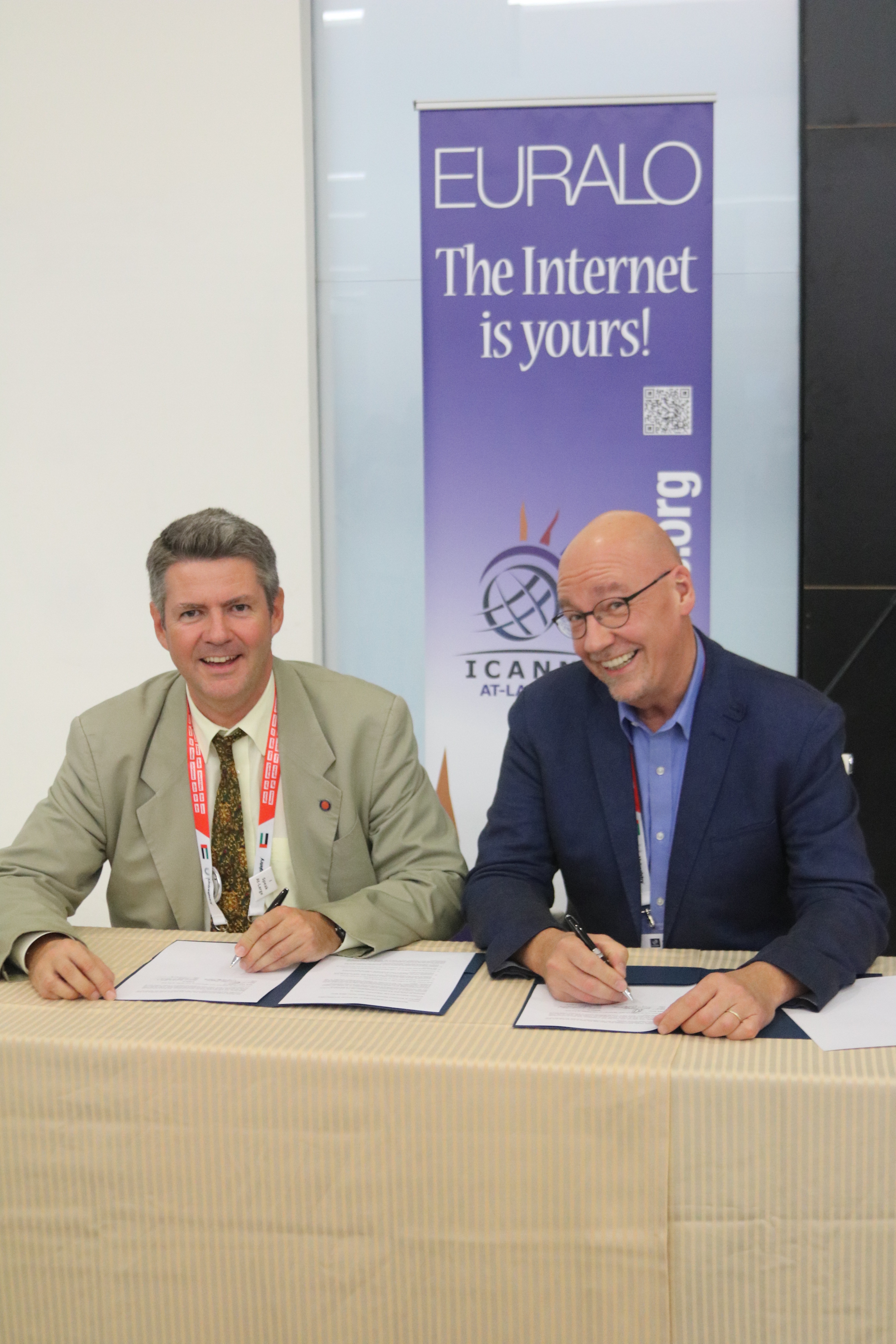 The month of October 2017 saw the opening of the position of EURALO Secretariat to an open selection process. Other EURALO selections had already taken place earlier in the year, but the Secretariat position was not subjected to the same constraints as EURALO ALAC or Chair representatives. Olawale Bakare (Wale) was selected as the next EURALO Secretary. He was fully briefed in a call with outgoing Secretary and ex-Chair (for 9 years) Wolf Ludwig and current Chair Olivier Crépin-Leblond, as well as At-Large staff in a call recorded at: 2017-10-03 EURALO Secretariat Position Discussion Call.

On the monthly call, Wale made a Presentation on CCWG Auction Proceeds for new gTLDs. Details of the Hopt Topics, Strategy and Outreach Strategy were shared with members.

With agreement in EURALO as well as RIPE, the signing of the EURALO - RIPE Memorandum of Understanding was set to proceed forward at ICANN60. Whilst not in the EURALO region, Abu Dhabi is in the RIPE region and many RIPE stakeholders attended the ICANN60 meeting as the RIPE meeting had taken place one week earlier in Dubai. With the next European ICANN meeting being in Barcelona in October 2018, this was judged to be too far in the distance to wait - thus the signing ceremony was prepared for Abu Dhabi.

The month of September is usually a busy one, as EURALO members return from a well deserved summer break.

The DRAFT RIPE MOU was finalised.

The EURALO Hot Topics 2017 was finalised. Essentially, it was an update on the Hot Topics 2016, adding the General Data Protection Regulation (GDPR) as a very hot topic for Europe. ICANN is impacted by the GDPR and has its own pages about the topic too.

The EURALO Strategy was finalised thanks to the input of EURALO members.

The EURALO Trip/Event Assessment 1 were completed by CROPP travellers - with a strong sense that the trips were very beneficial to the travellers, but also that the impact of EURALO's involvement and profile at EuroDIG was greatly enhanced. The ICANN Budget showed amendments to the CROPP now becoming a regular program thus losing the "pilot" part resulting in CROP.

The EURALO Outreach Strategic Plan for FY18 was approved by Regional VP Jean-Jacques Sahel. The plan aims to focus on more European events, including the Global Internet Governance Forum (IGF) taking place in Geneva in December 2017.

There was no August EURALO call due to the traditional summer break in Europe.

The EURALO Outreach Strategic Plan was completed and filed in late August.

Progress was made to sign a MoU with RIPE. Discussions were undertaken on the mailing list and on the monthly call on whether to include additional language. Decision was made to send the draft to RIPE for review.

The EURALO By-Laws Task force continued its work with 2 more calls in June, but cancelling its July call due to the Summer recess.

Work already started on devising the EURALO CROP FY18 Strategy, taking the Reference FY17 Strategy as a reference starting point. Concern was emitted about the next EuroDIG and SEEDIG taking place in Tbilisi, Georgia, outside the EURALO region. Wolf Ludwig, EURALO Secretary opened discussions with Jean-Jacques Sahel, VP for Western Europe, regarding this topic.

Discussion on EURALO Quorum in its bylaws continued on the EURALO BY- LAWS Table of proposed Quorum .

The EURALO Chair, Olivier Crépin-Leblond, informed the EURALO Board and members that advanced discussions were underway to sign a Memorandum of Understanding for collaboration between EURALO And RIPE.

The EURALO Bylaws Task Force discussed quorum, through a EURALO BY- LAWS Table of proposed Quorum . Discussions faced difficulty due to no complete consensus on the quorum levels.

EURALO filed an IGF workshop proposal for: Session Title: Reinforcing the role of end-users in defending the Public Interest. Full details of this proposal and other proposals are found on: At-Large 2017 IGF Workshop Proposal Workspace

Christopher Wilkinson explained to EURALO members, the WHOIS issue in context of the implementation of the EU General Data Protection Regulation (GDPR ) and taking into account the Updated ICANN Procedure for Handling WHOIS Conflicts with Privacy Laws .

The process for the 2017 EURALO Regional Selections was launched. This is an involved process that needs to be started early, in order to offer a fair and open process for all EURALO leadership positions. These positions need to be filled prior to June 2017, for an actual seating at the ICANN AGM in October 2017 at ICANN60 in Abu Dhabi. The reason for an early selection is due to the ICANN Nominating Committee (NomCom) making its decision on appointments at the end of June 2017 (ICANN59): the NomCom has a duty to balance stakeholders (geographic, gender, skills) on the committees it appoints people to, thus a full line-up of EURALO appointments needs to be complete by then.

It was decided to test the drafting of two Statements by directly soliciting At-Large Structures, based on the EURALO ALS Expertise Table drawn up by the EURALO Task Force on At-Large Structure (ALS) engagement in order to draft and send the following statements : 1) Revised ICANN Procedure for Handling WHOIS Conflicts with Privacy Law:Process and  2) Next Steps and Draft Framework of Interpretation for Human Rights. Relevant ALSes were identified in the ALS expertise table, asking if they are willing to comment on those statements.

During its monthly call, members were updated that work on the TaskForce on ALS engagement continued, with a table of competencies being finalised.

In particular, the EURALO Bylaws TaskForce focussed on adherence to Swiss Law for the form of the Bylaws, and its more intricate details.

EURALO Contributed extensively to the RALO Statement on At-Large Review.

In addition to the EURALO F2F General Assembly ( EURALO Activities at ICANN 58 Copenhagen, Denmark )  the EURALO Board also held a special purpose call: 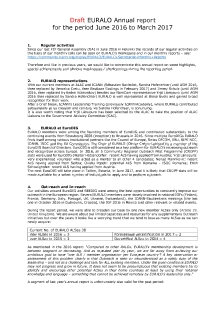 Bastiaan Goslings was selected to be the next ALAC member to replace Veronica Cretu. It si worth noting that EURALO held a 2017-02-08 Meet the candidates – EURALO Replacement ALAC member call which was found to be very helpful in selecting a candidate. Thanks went to Oksana Prykhodko for being an excellent contender in the selection.

Preparations were underway for the EURALO Activities at ICANN 58 Copenhagen, Denmark.

The TaskForce on ALS Engagement analysed all responses received from ALSes and prepared a EURALO ALS Expertise Table which will be used in the future to target specific ALSes when needing to respond to public consultations. Yrjö Länsipuro, Chair of this TaskForce, to send the EURALO ALSes Subject matter Expertise Table in google doc format to all EURALO ALses and ask them to  include their names in the table next to topics that they are interested in.

The TaskForce on EURALO Bylaws proceeded with renewed work by restarting its operations, as led by Wolf Ludwig, Erich Schweighofer and Florian Hule. That progress could be tracked regularly by going on the TaskForce's homepage on: Task Force on review and revision of the EURALO By-Laws

Preparations were underway to put together a joint NCUC-EURALO Capacity Building and Outreach Session at ICANN Copenhagen.

Newly selected EURALO ALAC member, Veronica Cretu, has stood down and a new process needed to be started to select a replacement. See: EURALO Extraordinary Selection of ALAC Member 2017 Workspace.

EURALO discusses preparations for its General Assembly (GA) in Copenhagen.