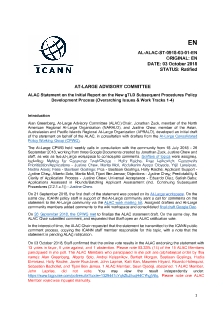 On 26 September 2018, the CPWG met to finalize the ALAC statement draft. On the same day, the ALAC Chair submitted comment, and requested that Staff open an ALAC ratification vote.

While the ALAC and wider At-Large community continue to debate the actual benefits to communities in expanding the New gTLD Program (“Program”), we acknowledge that the Program will likely continue to be expanded in one form or another.  In this respect, the ALAC considers this opportunity to comment on the Initial Report on the New gTLD Subsequent Procedures Policy Development Process (Overarching Issues & Work Tracks 1-4) dated 03 July 2018 (“Initial Report”) a valuable one, and wishes to put on record our responses, suggestions and in some cases, advocacy, to the preliminary recommendations and questions as posed by the GNSO New gTLD Subsequent Procedures PDP Working Group (“WG”) in its Initial Report, from the perspective of and benefit to Internet end users At-Large. On the same note, we have also chosen not to offer comments to selected sections of the Initial Report, namely sections which the ALAC believes has little or no impact on Internet end users, as indicated herein. On the same note, we have chosen to offer comments only to parts of the Initial Report which we believe carry an impact on Internet end users.

In particular, the ALAC wishes to highlight to following key consensus positions:

The ALAC believes that regardless of whether future applications are called for by way of a “round” or “rounds” or on a first come, first served (FCFS) basis, all applications must continue to be batched for assessment to allow for not only fair competition in string selection, but also to facilitate manageable review procedures by various stakeholders (from Initial Evaluation to public comment, GAC Advice / GAC Early Warning, objections) and resolution procedures for contention sets and Community Priority Evaluation (CPE).

In any case, the ALAC strongly advocates against the immediate commencement of a permanent FCFS process of accepting New applications for the Program.

Community applications which end up in the CPE process should be able to trust that the process will be open and flexible enough to accommodate them. The ALAC offers a series of suggestions for improvement:

With respect to the definition of communities, we think the definition of association used by the European Court of Human Rights and the United Nations: "An association is any group of individuals or any legal entities brought together in order to collectively act, express, promote, pursue or defend a field of common interests" could be useful. But we feel the real issue is in ensuring that members of the CPE have a full understanding of the types of communities bringing applications forward and are able to deal with them in a flexible way. Arbitrarily restricted interpretations and limited definitions applied on an ad hoc basis discriminate against valid community applications which do not fit into prevailing assumptions.

The ALAC believes that communities should continue to be given special consideration. We support differential treatment for community applications in the form of access to experts to assist communities, particularly those from and/or which are conceived to serve underserved regions, in preparing applications; we believe there should be a mechanism within this process which is set up to help first time community applicants; we believe that the concept of membership must be flexible enough to take into account the fact that geographically dispersed communities often do not have traditional membership lists and should not be penalized for this.

The CPE process needs to be more transparent and predictable. Details about all the procedures used in decision making must be available to applicants well in advance of the deadline for submissions; background information about CPE participants, including support teams must be fully available to enable conflict of interest oversight; and data/documentation/research materials consulted in decision making must be referenced and released as part of the decision. Applicants should also be updated periodically about the status of their application. It is important the CPE team include representatives from grassroots community organizations and the ALAC has offered to assist in this task.

The ALAC believes that metrics should be developed and used both to gauge the extent to which Internet end users have benefitted from the introduction and use of New gTLDs and to highlight areas in which improvements to the introduction can be improved for the benefit of end users.

Public Interest Commitments (PICs) are a core part of the ALAC's campaign for TLDs that have a high public interest worth. Therefore, the ALAC supports the prospects of ICANN codifying Mandatory PICs. The ALAC also notes the usefulness of Voluntary PICs from the 2012 rounds in respect of applications for strings representing highly regulated sectors and on this basis supports the continued use of Voluntary PICs in the effort to protect the interest of Internet end users.

The ALAC strongly advocates for Applicant Support to continue to be open to applicants whose applications are conceived to serve underserved regions and/or underserved communities regardless of their location, so long as they meet the other Applicant Support Program (ASP) criteria. Further, we believe that it is imperative that ICANN improves the global awareness of the ASP through effective means. The ALAC also advocates for all Applicant Support applicants who are found to have failed the criteria for the ASP to be allowed to decide if they wish to pursue or withdraw their application, with the grant of sufficient time to pay the balance of the full application fee amount unless the Support Application Review Panel (SARP) determines that an application has been the subject of wilful gaming. Terminating all applications determined as not meeting the criteria as was the case in the 2012 round is a disproportionate means of preventing gaming of the ASP.

The ALAC is strongly in favour of IDNs being continued as an integral part of the Program since – putting aside telecommunications infrastructure availability (which is beyond the remit of ICANN) –  IDNs have the potential to benefit countless communities whose languages are not Roman-script based. While the ALAC agrees with many of the preliminary recommendations set out in the Initial Report, it also advocates for Pre-Delegation Testing to continue to be conducted for TLD applications as a prudent safeguard measure, regardless of the presence of a general agreement on compliance with IDNA2008 (or its successor(s)) and applicable LGRs. The ALAC also believes that IDN variant-related policies such as “bundling” are best handled at the TLD level, provided that if both variants are registered, they need to be under the control of the same registrant.

The ALAC believes that the primary obstacle to the successful expansion of the domain namespace is the rejection of these New strings by legacy code. It behoves the ICANN community to engage in substantial outreach to the Internet community on this issue. The ALAC acknowledges the challenges associated with such outreach but the fact that some of the largest websites on the Internet, including major banking and airline sites continue to reject the New strings suggests that more can – and must – be done to advocate code revision on the Internet.

In several places in our response, the ALAC defer to the SSAC for further recommendations. This includes areas such as dotless domains and name collisions. Again, we reiterate, there is no cause for urgency surrounding the further introduction of gTLDs and due time should be given to the SSAC to explore the security and stability implications of various proposals before any New round should begin.

The ALAC advocates for the ALAC and the Independent Objector (IO) to have continued active roles in filing objections to applications for strings and that they be funded by ICANN. In the case of the ALAC, we do not believe there should be any additional limits or conditions placed on the funding for ALAC objection filing and Dispute Resolution Procedure (DRP) costs. In the case of the IO, the ALAC supports the retention of the “extraordinary circumstances” exception as described in the Initial Report and we opine that the IO may, under certain circumstances, even have a role to play in String Confusion Objections. With respect to the DRP process, we strongly advocate for the process to be kept affordable, especially to communities and non-profit organization objectors, and that any applicable rules or procedures, as well as costs for DRPs, must be required to be published well in advance of any procedure being commenced. We also strongly advocate that guidance for DRP panellists be substantial in respect of adopting definitions of terms – such as “community” and “public interest” – as well as questions on objector standing, in an effort to limit the “damage” resulting from panellists’ unfamiliarity with the ICANN community structure, divergent panellists’ views – even values – on the same, and which conflict with the goals stated in ICANN’s Bylaws or GNSO consensus policy.

Finally, a number of questions address the question of “registrant protections” or more broadly, the standards that should be applied to applicants for New gTLDs. While the ALAC concedes there might be special circumstances that require adjusting the evaluation process to accommodate applicants for underserved regions and perhaps brand TLDs, we maintain that standards for applicants should remain high. Furthermore, whatever the standards that are ultimately set, ICANN should do a better job of applying those standards during the application process than was done during the 2012 round. There are certainly instances when applicants that failed to meet the registrant protection standards were nonetheless allowed to proceed, casting the shadow of impropriety on the entire process.

PLEASE NOTE THIS DRAFT HAS BEEN COPIED FROM A LIVE GOOGLE DOCUMENT FOR COMMUNITY INPUT. COMMENTS ON THIS DRAFT WILL BE OPEN 21 - 25 SEPTEMBER 2018.