With a significant increase in the number of accredited At-Large Structures (ALS) and Individual Members joining the At-Large community since January 2016, an At-Large Orientation Program was relaunched in June 2017. The aim of this program is to facilitate ALS and Individual Member participation within their Regional At-Large Organizations (RALOs) and to promote their policy development activity within At-Large and ICANN. 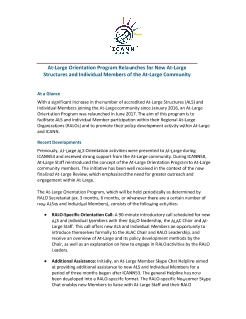