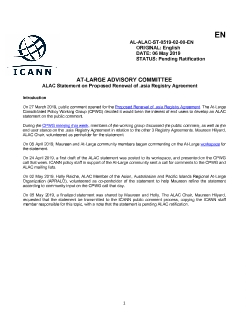 The ALAC supports the proposed changes to the .asia (DotAsia) renewal agreement, with the following comments:

Fees to be paid to ICANN org: In respect of Section 6.1 of the proposed renewal agreement, the ALAC counsels for both the registry fixed fee (presently proposed at $6,250 per calendar quarter) and the registry-level transaction fee (presently proposed at $0.25 for each annual increment of an initial or renewal domain name registration) to be adjusted for inflation on an annual basis. This adjustment ought to also be adopted in the base Registry Agreement.

As a Registry Operator which offers Internationalised Domain Name (IDN) registrations across the Asian region, DotAsia already promotes UA within Asia and is a lead participant in the UASG. This initiative is fully supported by the DotAsia Board.  At-Large is also encouraged that following ICANN64 and the interest that was raised during the Kobe meeting, the ICANN Board Chair endorsed community support for this renewed UASG effort.

It has been recommended that the New gTLD Subsequent Procedures Working Group should look into including UA into the requirements for the next round, just as IPV6 and DNSSEC were included during the 2012 round.

While it is noted that the removal of price caps from other registry agreements that are also being considered in this round of public submissions, are currently under discussion, At-Large notes a report from DotAsia that it does not intend to make any changes to its current pricing agreements and will continue to maintain its normal annual renewal price to registrars per domain year.