Auctions as the Mechanism of Last Resort

The ALAC supports the retention of auctions to be conducted by ICANN-appointed auction service providers as a mechanism of last resort to resolve contention sets within the Program in the first instance, with more guidance and resources to be put in place to help applicants get out of contentions sets voluntarily. The ALAC further proposes the ICANN Community explore the introduction of a multiplier-enhanced Vickrey auction in place of the regular highest-bid auction process as the resolution mechanism of last resort.

The ALAC continues to hold the belief that auctions, by design wherein the highest bid prevails, will naturally favour applicants with access to the greatest financial resources or deepest pockets and by extension, disadvantage less wealthy applicants (such as Applicant Support Program applicants). Whereas it is not always the case that the “best” applicant is the one with the most resources.

By this logic, an alternative contention set resolution mechanism, one based on comparative evaluation processes would strive for greater fairness along with the ability to select the “best” applicant using a pre-determined set of criteria (such as diversity, priority for community-based TLD, minority-supported applications, first-time applicants, in the public’s interest etc). In this respect, we favour the “Request for Proposals” option, but not the “Random Draw” or the “System of Graduated Fees” options. However, the ALAC acknowledges that true success of a comparative evaluation mechanism, especially one based on value judgments, is heavily dependent on not only the availability but consistent application of clear and strict assessment and scoring processes. Based on the experience of the 2012 round applications which underwent Community Priority Evaluation (CPE), we are not confident that an alternative mechanism based on comparative evaluation processes can be established easily. If at all, its development would require extensive consultation with all stakeholder groups.

The Supplemental Report noted that more than 90% of contention sets from the 2012 round were resolved voluntarily by the competing applicants (even if the nature of some of the resolutions were not entirely transparent to the ICANN Community). This, in our opinion, left an acceptably small percentage of unresolved contention sets going to ICANN-endorsed auctions as the resolution mechanism of last resort. Assuming additional but controlled flexibility is introduced to the Program via permissible Change Requests (as contemplated in Section 2.4 of the Supplemental Report) then the ALAC is further comforted by the possibility that incidences of contention sets could be more desirably resolved other than by way of auctions.

In any case we also acknowledge that ICANN-endorsed auctions generate proceeds which could be used to further Community public interest goals or activities as contemplated by the Auction Proceeds Cross-Community Working Group.

Therefore, the ALAC reverts to supporting the retention of auctions to be conducted by ICANN-appointed auction service providers as a mechanism of last resort to resolve contention sets within the Program in the first instance. We also suggest that greater effort and more resources be put towards effective guidance and navigation for applicants in contention sets to voluntarily resolve the same.

Further, the ALAC is supportive of the option to introduce the Vickrey auction in place of the “regular” auction, as the resolution mechanism of last resort. Although the Vickrey auction still relies on the notion of a winning highest bid, the ALAC opines that its nature of accepting placement of secret-bids will do a lot to prevent in future rounds the repeat of some of the speculative applications which were submitted in the 2012 round.

In addition, the undesirability of auctions favouring applicants with the deepest or deeper pockets can also be tempered by adding a multiplier feature in favour of certain applicants – namely those that qualify for Applicant Support under the Application Support Program (ASP) and those that prevail in Community Priority Evaluation (CPE) but subsequently enter into a contention set for their applied-for string and having failed the voluntary resolution route. These applicants could have their secret bid automatically upgraded by a fixed capped multiplier to level the playing field for them in a Vickrey auction. Please see our response to Option 2.1.d.1.

Therefore, the ALAC further suggests that the introduction of such a multiplier-enhanced Vickrey auction be explored by the ICANN Community.

The ALAC sees the merit of retaining Implementation Guidance F in that allowing permissible Change Requests is in principle useful for enabling voluntary resolution of contention sets. We also recognise the immense challenge in describing exhaustively what forms of private resolutions ought to be permissible and what are disallowed. Therefore, while we do not support the option for a total ban on all forms of private resolution, we are, however, strongly opposed to allowing forms of private resolutions which result in any applicant gaining or even being promised a financial benefit in return for withdrawing their application in order to resolve a contention set. This necessarily means we are strongly opposed to allowing private auctions; we believe that any auction which cannot be avoided should be one conducted by an ICANN-appointed auction service provider and using the modified Vickrey auction described in our response to Option 2.1.d.1.

It follows that the ALAC supports the option to amend the Applicant Guidebook and program Terms & Conditions to state that resolution of string contention via private resolution, where a party is paid to withdraw, is disallowed and where determined as such would lead to the application for that applied-for string not proceeding. We also support the option that the future version of the base Registry Agreement should include a provision that states that if a registry operator is shown to have taken part in a private resolution for their given string, it may result in the forfeiture of that TLD.

Having said this, the ALAC is mindful of the complications in taking the approach of allowing some forms of private resolutions but not others. Further careful consideration by the ICANN Community is needed to formalise a coherent list of criteria against which actions taken by applicants in contention sets can be assessed for permissibility. Greater effort and more resources would need to be put towards effective guidance and navigation for applicants in contention sets in voluntary private resolution attempts, including allowable Change Requests, throughout the application process. Resources would also need to be invested into monitoring and evaluating the parties’ actions post-delegation. An appropriately skilled and representative panel of evaluators may be needed to conduct the assessments, especially where clarity of the list of criteria is considered insufficient.

The ALAC supports the WG’s preliminary recommendations 2.3.c 1 to optimize the mechanisms and system for Application Comment and 2.3.c.2 for ICANN to be more explicit in the Applicant Guidebook on how public comments are to be utilized.

In pursuit of fairness, we are supportive of the idea of limiting the comment period for CPE to run parallel to the Initial Evaluation comment period. We also think it is appropriate to allow applicants an additional but limited period of 7 days after the close of a 60-day public comment period strictly to enable applicants to respond to late comments if they so choose.

The ALAC supports the WG’s preliminary recommendation 2.4.c.1 for operational improvements to the high-level, seven criteria-based change request process from the 2012 round. We also think ICANN Org must determine if re-evaluation is needed to ensure if a new JV entity that is created as part of an allowable change request still meets the requirements of the program. Similarly, ICANN Org must perform a re-evaluation of the new applied-for string in all string related evaluation elements (e.g. DNS Stability, String Contention, etc) and for the new string to be (a) subject to name collision risk assessment, (b) put out for public comment and (c) open to established Objection procedures.

The ALAC opines that the existing seven criteria as listed in the Supplemental Report (on page 27) along with name collision risk assessment serve as a strong foundation for considering change requests to applied-for strings. Any change request for a new string where name collision risk is present or if the new string is not closely related to the original string – as determined through expert /community input – or if the new string is an exact match to an already-applied-for string, must not be approved.

The ALAC believes that the opportunity for public comment to change requests is important because that process allows the ICANN Community to raise concerns to them or even to withdraw or acknowledge that concerns raised on the original applied-for string in contention have been mitigated through a change request, if it is so.

The ALAC declines to respond to the options and questions put forth by the WG on the topic of Registrar Support for New gTLDs. 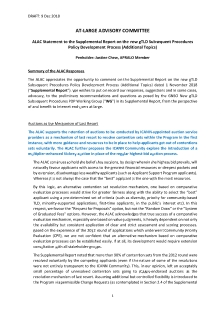