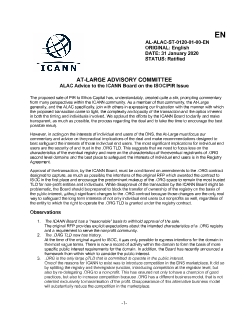 ALAC Advice to the ICANN Board on ISOC/PIR Issue

The proposed sale of PIR to Ethos Capital has, understandably, created quite a stir, prompting commentary from many perspectives within the ICANN community. As a member of that community, the At-Large generally, and the ALAC specifically, join with others in expressing our frustration with the manner with which the proposed transaction came to light, the complexity and opacity of the transaction and the optics inherent in both the timing and individuals involved. We applaud the efforts by the ICANN Board to clarify and make transparent, as much as possible, the process regarding the deal and to take the time to encourage the best possible result.

Approval of the transaction, by the ICANN board, must be conditioned on amendments to the .ORG contract designed to capture, as much as possible, the intentions of the original RFP which awarded the contract to ISOC in the first place and encourage the predominant makeup of the .ORG space to remain the most trusted TLD for non-profit entities and individuals. While disapproval of the transaction by the ICANN Board would be problematic, the Board should be prepared to block the transfer of ownership of the registry on the basis of the public interest, absent significant changes to the .ORG contract because those changes are the only real way to safeguard the long term interests of not only individual end users but nonprofits as well, regardless of the entity to which the registry contract is delegated.

The ALAC respectfully submits that .ORG is a special domain that requires unique requirements or enforceable Public interest Commitments (PICs) within the registry agreement. It is only through explicit requirements in the RA that .ORG has the best hope of maintaining the public trust it has largely earned since the original RFP. Maintaining a top level domain devoted primarily to nonprofits and individuals is critical to the internet community and the board should be prepared, however reluctantly, to block the sale of PIR to Ethos Capital, absent substantial changes to the Registry Agreement under which Ethos, or any future entity, must manage the domain.

The ALAC appreciate the opportunity to comment on this process and look forward to further discussions on this historic transaction.